“Unsimilarity, like resemblance, may be the cause of mutual attraction” Emile Durkheim

Lovely ladies, in this article we challenge you to think about your desires and goals, and to compare your expectations with your actual experience of dating foreigners. Based on our experience we can say that the mistake of many ladies is to transfer (often unconsciously) behavior, dating and relationships of Slavic men to foreign men. This happens because many women have no experience in communication, dating and relationships with foreign suitors.

Take your time and try to give an honest answer to the following questions. What do I know about men from abroad? Are my ideas about foreign men, their way of thinking and behavior based on my experiences with Slavic men? Am I not transferring the way of action of my compatriots’ men to foreigners? In other words: Do I not picture a Slavic man as a foreign bridegroom?

We encourage you to treat your personal life and dating foreigners consciously. That means, First of all, to understand what kind of relationship you are looking for, to understand what kind of man you would feel comfortable with and would like to tie your life together, regardless of other people’s opinions or stereotypes, possibly imposed by outsiders. In order to understand whether men from a particular country are right for you, you need to understand the mentality of the people in that country. Unfortunately, in real life the following scenario can unfold: a woman is attracted to a country and life in it, but she cannot “get along” with a typical representative of that nationality, let alone create a happy family and harmonious relationships. 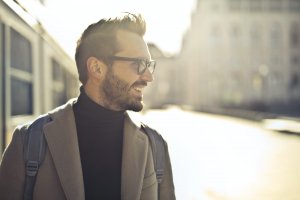 Note that it is worth distinguishing between the mentality, national character, and the personality, the individuality of a person. In this article, we are talking in general terms about the representatives of this or that nationality. What makes a man a German or an Austrian is socio-cultural: the society in which he grew up, the economic and political situation, the influence of culture and tradition. However, every man, if he is seen as an individual, may not fit the definition of a typical German or typical Austrian.

In order to successfully find a foreign husband, it is necessary to understand whether the typical German fits me, or whether it is easier for me to find a common language with a typical American. Because in spite of the individuality and personality of the man, in communication, in relationship and in further life together there will be felt features of his mentality, as a representative of this or that culture. Over time it will be simply impossible to change the man or “eradicate” the peculiarities of his mentality.

How can you find out more about the mentality of a foreigner and his attitude towards women?

The inner world of every person, regardless of the country of residence, is influenced by the following factors.

In order to understand what men from a particular country are like, you need direct experience with them and knowledge of the culture, life in the country, the political and social situation in which they were raised and live. This experience cannot be replaced by books or articles. After all, there is no precise scientific discipline called “foreign men,” and books and articles are written based on the personal experiences of the authors. At the end of the day, every woman has her own expectations of a relationship, values special qualities in a man that may not be important to other ladies. The words of Agatha Christie express this thought most aptly: “that’s how strange the world is: how two different people can see the same thing, each one different.”.

Finally, we would like to share with you links to two articles written in English about the differences between American and European men. Unfortunately, these articles are not translated into Russian. However, let’s remind you that knowledge of a foreign language plays an important role in dating foreigners 😉

The 11 Differences Between Dating A European Man VS An American Man, Amy C.

One thought on “From Which Country I Need To Choose a Man?”