we will begin our introduction to German men and Germany with the holidays and the traditions that accompany these holidays. After all, in order to learn more about the Germans and perhaps better understand the peculiarities of their mentality, it is necessary to get acquainted with their national culture.

Characteristic of Germany is a careful attitude and respect for long-established traditions: holidays, traditional types of clothing, food and drink. Germans are proud of their identity, they enjoy cooking and eating national dishes and wearing traditional clothes on holidays.

Many official (state) and folk holidays are based on religious or historical traditions. In this case, different Federal Länder* may celebrate different holidays, accordingly different weekends may be in all of Germany.

Massive folk festivals are one of the features of celebrations in Germany. Some holidays, such as carnival (Fastnacht / Fasching) and Oktoberfest, are accompanied by popular festivities. People take to the streets, often dressed in traditional or simply festive clothes, sing songs together, eat national dishes, and drink (no holiday is complete without traditional drinks such as beer).

“Liaba an Bauch vom saufa, ois an Buckl vom arbatn “** : better a belly from drinking than a hump from working!

Oktoberfest in Munich is world famous! It’s not just a festival for beer lovers, but a real German tradition that has its own history. The festival began in 1810, when crown prince Ludwig I and Princess Therese of Saxony got married. All citizens of Munich were invited to the festivities in honor of the wedding, where they were treated to free beer. The festivities turned out to be so much fun that Ludwig I decreed that Oktoberfest be celebrated annually.

Regional “Oktoberfests” take place in many German cities. However, the center of the festivities remains Munich. On the opening day of the festival, the mayor of Munich gives a symbolic start to the “beer festivities” by opening a keg of beer. At this time the giant “beer tents” (Bierzelt) open – 14 of them according to tradition. However, they are astonishing in their capacity. For example, the Augustiner-Festhalle, the beer tent of the Augustinians, can seat 10,000 people. Beer is traditionally only drunk sitting down, so we’re talking about 10,000 seats! During the 16 days since the opening of the festival, there are colorful costume parades, races, concerts, and processions.

Oktoberfest is characterized by a special kind of clothing – tracht: the Bavarian national costume. For men it’s short or knee-length leather pants with suspenders (Lederhose); for women it’s Dirndl: a blouse with a corset and a wide skirt with a brightly colored apron.

When thinking of carnival, many imagine the world-famous colorful carnival in Brazil. However, not everyone knows that Germany also has its own carnival tradition. During this time, on the streets of large cities you can find witches, jesters, kings and princesses, and simply smartly dressed men and women. 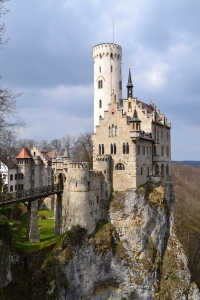 German carnivals take place in February in various Catholic regions of the country. The most famous are the carnivals in Cologne and Munich.

Preparations for the carnival procession begin as early as November! November 11 at 11:11 to be exact! 🙂 On this day carnival “committees” gather in different regions of Germany.

Carnival week begins on Thursday and, most interestingly, the beginning of carnival is celebrated only by women! On this day, called Weiberfastnacht, the fair sex dress up as witches, devils, or fairground vendors, and have fun in the streets of town, and by evening in bars and restaurants. Careless men, on the streets or in bars, at this time may be left without a tie (or it will become much shorter), without laces, or without clothes at all!

The main event of carnival week is “Rose Monday,” or frenetic, magnificent Monday (Rosenmontag). On this day, in the main streets of large cities, car traffic stops and a carnival procession takes place. Carnival participants and spectators sing songs, handfuls of sweets fly into the crowd of spectators, cups of wine and beer are handed out. The procession ends with a big concert on one of the central squares of the city.

On Tuesday it is the turn of the children to celebrate carnival. Dressed up, they come to school and after school go to their “homes” to collect sweets and small souvenirs.

Carnival ends on Wednesday with a church service and it is time for Lent.

Festivals such as Carnival and Oktoberfest are accompanied by a feeling of togetherness, when complete strangers sing songs together, raise their glasses (or beer mugs) together, and give each other smiles. This way of celebrating certain events does not fit the stereotype of the German as a serious, strict and practical person. During the holidays, Germans and German women turn into relaxed, cheerful people, singing songs in the streets.

Intermediate summary: in Germany they like to celebrate merrily and noisily, with music and folk festivities 🙂

Family holidays such as Christmas (Weihnachten) have a special place in German tradition. The majority of Germany’s population is Christian and belongs to the Catholic, Protestant, or Orthodox churches. Throughout Germany, Catholic Christmas is celebrated. It is a traditionally religious holiday that still plays an important role in the lives of modern Germans, whether or not they attend church. It is a time when people forget the hustle and bustle of everyday life, take stock of the past year and think about the most important things in everyone’s life: their families, relatives and loved ones.

Expectation of the holiday and preparations for it give rise to a special mood. This is associated with a number of traditions that from year to year bring joy not only to children, but also to adults.

In December, Christmas markets (Weihnachtsmarkt) open all over the country: fairy-tale teremoks, festively decorated houses appear on the main square, carousels begin to work and Christmas music is played. At this market it is possible to buy traditional Christmas sweets, for example, sugar almonds or gingerbread, to drink a mug of hot spicy mulled wine (Glühwein), to buy handmade Christmas decorations and traditional souvenirs. In the evening at the Christmas market music is played, people gather and celebrate this pre-Christmas season together.

December 6 is St. Nicholas Day (Nikolaustag), in the Russian tradition Nicholas the Wonderworker. St. Nikolaus has long been considered the patron saint of families and children. According to legend, on the night of December 5 to 6, St. Nikolaus visits children: he gives sweets to those who have behaved well this year and punishes naughty children.

Nowadays, on the evening of December 5, children put their boots out the door to find presents from St. Nicholas there in the morning: both naughty and diligent children will be happy.

Another “sweet” reason to look forward to the arrival of December is the Advent calendar (Adventskalender). A special Christmas calendar of 24 days, each day corresponds to a “door” that hides a sweet treat. It is not only fun for children, but also for adults. You can buy such a calendar in a regular supermarket or at the Christmas market.

The next delicious tradition is special Christmas baking. Throughout December, women and sometimes men bake special Christmas cookies, Plätzchen. Every housewife has her own recipe for making them. Homemade pastries are given to family, friends and colleagues.

Christmas is an occasion for the family to get together. On Christmas Eve, December 24 (Heiligabend), the streets of cities die out, all restaurants and stores close. Families gather together around the festive table.

Our goal was, through the holidays and some traditions, to show how different Germans and their culture can be. German men combine family values and a cheerful, cheerful disposition.

Not a complete list of church, state, and national holidays in Germany.

Some holidays do not have an exact date because they are traditionally fixed to a certain day of the week of a particular month or are assigned according to the church calendar.

The Feast of the Three Magi (Heilige Drei Könige) or Epiphany is a church holiday. It is celebrated on January 6 (day off) in three federal states: Bavaria, Baden-Wittenberg, Saxony-Anhalt.

Carnival (Fastnacht / Fasching) The final days of the carnival, which began in November, fall in February, the day varies each year. These days include Rosenmontag, the “apogee” of the carnival festivities, which always falls on a Monday.

Palm Sunday (Palmsonntag), Good Friday (Karfreitag), Easter (Ostern), Easter Monday (Ostermontag) are church holidays and are celebrated according to the church calendar (each holiday is celebrated on a certain day of the week, the holiday date changes each year). These are traditionally days off.

Ascension Day (Christi Himmelsfahrt) is a church holiday, the date is assigned according to the church calendar (day off).

Trinity (Pfingsten) is the date of celebration according to the church calendar.

Trinity Monday (Pfingsten Montag) is a Monday (day off).

The Feast of the Body and Blood of Christ (Fronleichnam) is celebrated on the second Thursday after Trinity (day off).

Augsburg Peace Day (Friedensfest) is celebrated on August 8 in Augsburg, Bavaria (day off).

Assumption of the Virgin Mary, Ascension of Mary (Maria Himmelfahrt) – August 15, a day off in the federal states of Saarland and Bavaria.

Oktoberfest (Oktoberfest) start date of the festival varies each year. As a rule, it is the second half of September. The duration of the festivities is 16 days.

German Unity Day (Tag der Deutschen Einheit) – October 3, the reunification of West and East Germany is celebrated everywhere in Germany (a day off).

Beginning of preparations for carnival festivities (the fifth time of the year) on November 11 at 11:11 a.m.

Day of Mourning or Day of Repentance and Prayer (Buß- und Bettag)-Wednesday, celebrated in the state of Saarland (day off).

Christmas Eve (Heiligabend) – December 24, a day off for most citizens, stores open until lunchtime.

New Year’s Eve (Silvester) – December 31, a day off for most citizens, stores open until lunchtime.

Our beloved March 8 and February 23 are not celebrated in Germany.

** Don’t be frightened, German is not that complicated 😉 This phrase is not written in “official” German, but in a Bavarian dialect!