online dating is fundamentally different from “live” dating. When a man and a woman get acquainted online, there is no spatial closeness, no effect of a person’s “live” presence: they cannot look into each other’s eyes, see how a new acquaintance or acquaintance behaves in the first minutes of acquaintance. When we meet “live”, we are attracted by the elusive image of the person: the combination of his movements, manner of speech, facial expression, gaze, smell. We cannot say exactly why we like him or her, we feel sympathy intuitively – we are attracted by the image. All this, however, is absent when we get to know each other online, through a dating site.

On dating sites with foreigners, the role of the image that mesmerizes and makes you take the first step towards dating is played by photos. Your picture is a man’s first impression of you. Whether it’s positive, neutral or negative, whether he compels a man to write to you is entirely up to you! 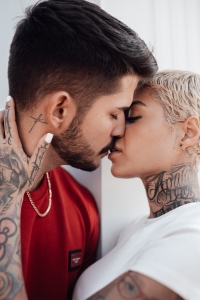 Create, with the help of your photos, an image which will reflect your personality and at the same time attract men! After all, in order to attract the attention of a serious man, you need to choose photos thoughtfully, rather than upload the first available selfies from a phone or a photo five years ago.

Not everyone is born with an ideal appearance and figure, however, every woman can fulfill the following tips.

As the main photo of the questionnaire, it is best to choose a photo – a portrait photo in which you are smiling and looking into the camera. A smile and a look directed at the camera disposes to acquaintance. The woman in the photo is open and will be happy to meet new people, she does not hide her look, she has nothing to hide. Don’t forget, men love to see a woman smile!

A stern and serious facial expression, on the other hand, is less attractive. A dating site is looking for a woman to share her life with, not to listen to her problems.

From the portrait a man should look at a woman who is cheerful and well-groomed. For that, think about moderate makeup and beautifully styled hair.

Remember that the main picture decides whether a man will stop his attention on this profile, on this woman, or continue to browse the women’s catalog.

Add some full-length photos. In doing so, pay attention to the following guidelines.

If you want to meet a serious man who is thinking of starting a family, then the profile photos should be appropriate. Let’s take a simple example, a woman in photos should look as if she is going on a first date, not to a nightclub, to the beach or to lie with a book on the couch. On a first date, as a rule, you don’t go on a first date without makeup, with hair styled and with a haggard expression on your face.

Choose clothes that will emphasize your femininity and give the image of elegance. It can be a dress, a skirt or pants – the main thing is that the clothes emphasize the virtues of a woman’s appearance.

After all, every woman knows the advantages of her appearance and disadvantages. It is necessary to emphasize the advantages of the figure and hide the disadvantages! We all are not perfect, however, there is no need to flaunt your “minuses” and wait that cupid’s arrow will pierce a man’s heart at the sight of dirty hair or extra pounds, emphasized by tight clothes…

Choose pictures that show you clearly! A man should see you, not the sea behind you or the beauty of the landscape. After all, what serious interest can we talk about when a man sees only a silhouette in the distance or a shadow on the background of a bright window?

Add life to your profile! If you have photos that show you in an unusual situation (like after a parachute jump, on a horse, or on top of a mountain), add them! This will help show how versatile you are, and perhaps give an excuse to easily and casually start a conversation. After all, it’s not always easy for men, either, to make the first step toward dating. And one picture can tell about a woman more than any, even the most detailed, listing of interests and hobbies.

This includes pictures with pets 😉 In the countries of Western Europe there is a special attitude to pets: they are family members, they are taken care of, taken care of.

Use only current photos! Photographs from years gone by create the wrong impression and consequently false expectations: not only of a man, but also of a woman. Disappointment will come when you see each other for the first time on Skype or, at the latest, when the first meeting takes place. Thus, you will only waste your time and the man’s time.

The danger of poor quality photos is that a man may think that the photo does not belong to you, that is, it was simply stolen somewhere on the Internet. Unfortunately, there are scammers on the Internet, and many men behave rather cautiously when registering on an international dating site and looking through profiles of the fairer sex. Photos of poor quality can be alarming, because, firstly, they can be stolen, and, secondly, if the quality of the photo is low, the photo may not be up to date (taken several years ago).

Why should you pay special attention to photo selection?

Many will say that appearance in relationships and family life is of secondary importance, and the main role is played by the character of the person, his personal qualities. And they will be right! But do not forget that we are talking about online dating. A questionnaire on an international dating site, no matter how versatile, cannot convey the full diversity of personal qualities and character of a person.

It’s the pictures that get men’s attention! It’s not without reason they say that men love with their eyes and women with their ears! Effective photos attract attention and compliments. In the end, it is the harmony of the image in the photo and personality description in the questionnaire, decide whether a man will write first, whether he will answer the message.

It’s important for men to like you, to get their attention, not to fight them

Having been disappointed and lost trust once, it is difficult to regain confidence and trust in men. If you initially treat online dating with suspicion and skepticism of foreigners, it’s easy to start disregarding writing culture, writing impersonal letters, uploading unsightly photos of poor quality, suspecting every new acquaintance of cheating and even being rude to men. These are all defense mechanisms. We are afraid to find hope, to make an effort, and to be disappointed. However, without making an effort, it is difficult to achieve our goal. After all, many events in our lives happen “because” rather than “in spite of,” happen not because we struggle with them, but because we put effort into them.

A man will write because the woman caught his attention with good pictures.

Despite the distance between them, he will fall in love with her because she was sociable, cheerful, not shy, not afraid to ask questions that interested her, not afraid of the language barrier and they could communicate easily, they could laugh together. All of this could happen, however, it would not happen in spite of silence, mistrust, bad pictures, and unequivocal answers.

Dating foreigners online is not a chance encounter of fate on the street, but a purposeful “job.” Men and women register on international dating sites because they have a goal – to get acquainted, meet their love, find a person with whom they can create a family, not just to sit online. Therefore, to achieve their goal, they need to work on themselves and make an effort.

Let’s look at the situation from a different angle.

The man who sits on the couch in sweatpants? Or the man who paid attention to his appearance and took care of a good photo?

A man in sweatpants is unlikely to get your attention and you probably won’t even respond to his message. On the other hand, a man who looks good has his own requirements for a woman and could easily be repulsed by a poorly chosen photo. He’ll think, if she looks like this when she wants to meet and please a man, how will she look when I want to introduce her to my family, colleagues, friends, when I get home from work?

Men’s attitudes toward their own pictures

Leafing through the male directory of an international dating site, you might think that many foreign men look rather ordinary or don’t pay attention to their appearance. This impression is born because of the photos that men upload in their profiles. Believe me, many men have a logical answer to this. However, for us women, it is difficult to understand this logic. If a woman is trying to show her best side, to be attractive, men prefer photos that depict them in an ordinary environment, in their “natural habitat”: that is, at home, in nature or in a bar. Men also don’t take the time to take a new photo if the first one wasn’t quite successful. They consider such photos more natural than professional shots. At the same time these same men have respectable photos that they use for their resumes, photos in which they smile and are well dressed.

Men in general are “creatures from another planet” and we women often have a hard time understanding them. This attitude towards photos does not mean that they register on an international dating site for fun or have too high an opinion of themselves. It’s just that many men really think that their photos should be natural and not staged.