A man is a straightforward creature. How to understand that a man is in love with you? As he is, so he says. Until he falls in love. A man doesn’t like to talk about love. Because “the man said, the man did.” If he says “I love you”, take him to the registry office. But a man never rushes there. That’s why he doesn’t say anything. So let’s find out how to tell if a man is in love when he’s not going to talk about it. At least not yet.

No illusions: 5 key signs of a man is in love with you

“He gave me a Chanel and got me tickets to the parterre. I think he loves me.” The only thing that should seem like that is that he’s courting. For what purpose, we have to find out. But don’t fantasize about his hidden feelings.

And we love to fantasize. And wherever our fantasy takes us. Often in the opposite direction from the truth. You think he can’t live without you, but he’s comfortable living with you. When it comes to whether a man loves you, you have to rely on facts.

Here’s . 5 facts that speak convincingly (unlike your fantasy) of the feeling of love.

The need for companionship. Guys are basically “silent.” But once they fall in love, the “silent ones” are ready to flail their tongues with the enthusiasm of a professional orator. They have a clear goal – to show themselves off and to find out about you. They will show themselves in the best possible way. You will learn about everything, from the kindergarten diploma “for skillful hands” to the talents of receiving kickbacks in front of the bosses. And be prepared for a biased interrogation. Falling in love is the moment when a guy is interested in you with the curiosity of a scientist. There will be no other such moment.

The urge to care. Love, besides words, is also deeds. His involvement in your life is directly proportional to the quality of your love. A guy who loves you won’t let you get cold, dry out, or go hungry. Will take your cat to the vet. Screw in a blown light bulb. Fix your faucet. Pay off a loan. Lend you money or give you money for nothing. Basically, he’ll take care of everything. And if you have to take the cat by yourself on the subway, because he “something started to malfunction carburetor,” let’s forget about his tender, strong and very loving hands. 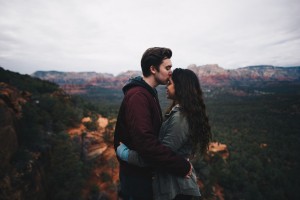 Sense of ownership. The possessive instinct is rooted in the animal world and has, like other instincts, a right to exist. Moreover, it determines the essence of the male’s relationship to a particular female. This male is always ready to explain to another male to whom a particular female belongs. The same thing the male is ready to bring to the attention of the female who has ambushed the other one. It’s trite, but to the point – jealous means in love. Because a man in love is a wild moor, not a sharing amoeba.

Full immersion. Claiming your rights to you is not only playing Othello, but appearing with you in public, “I own her.” They don’t hesitate to introduce you to their friends. And someone even introduces you to their parents. It wouldn’t occur to a guy to go to a party without you, and when you casually meet your great aunt, he’ll introduce you as a colleague from work. Behind the “you’re my secret outlet” communication, nothing good for the “outlet” in history ever was, is, or will be.

Priority Attitude. A man who loves is a man who has time. The soap opera about “no time” comes later, when the tomatoes wilt. In a state of love, even a goodwill ambassador to the continent of Africa will find time for you in his schedule. Because you are the priority. You matter as much, if not more, to him than hungry African children. 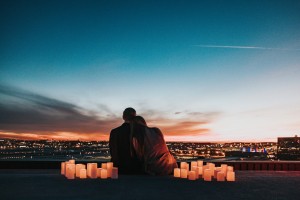 And bouquets of a hundred and one roses, texting “love you popsy,” pizza to go can have something to do with love, but indirectly.

In love but hiding: How to get a man to come clean

Sometimes circumstances are such that a man can’t or won’t “flame” himself on the surface. They usually can’t. Married. They don’t want to – colleagues concerned about reputation. Or cautious who “burn the milk and blow on the water.

Such a hidden man can be dissected and asked the right questions. The code word is intuition. And there are signs with which it is easy to tell if a man is in love, without a “third eye” – by gaze – by gestures and by manners.

Opinion of psychologists: how to understand that he really loves

One of the main problems with love, psychologists say, is that expectations about it are too high. Love is a big deal. And when it doesn’t turn out to be wow-ish, it means that it’s not quality love. Let’s figure out if it’s love or use.

Love is only a beautiful figure of speech. This feeling can be broken down into three aspects – moral, emotional, and physical.

And so if a man really loves you, these ingredients (aspects) should be equal. And if not equally, then at least all of them should be present.

It’s quite possible. After all, we all use each other. But some are blatantly manipulated by feelings. Here are some signs. 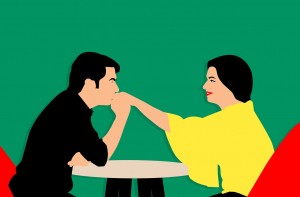 You don’t have to burn bridges with a man you don’t love. That will come in handy, too, if it comes in contact with the verb “to do. But you should definitely give up your illusions. Don’t take it personally. This one is one of those who have come and gone.

Read between the lines: how to tell from correspondence that a man is in love

If you’ve met online or are chatting on social media, wondering how to tell by correspondence if this guy is in love with me is pointless. Love is not the quantity and quality of typed characters. Although the love letters of the greats are, yes, evidence of love. But the letters were afterwards. Meetings and partings first. What is called life. So, bring the relationship to life, and then sort it out – love, not love, spit, kiss.

Not everyone is the same: How to understand a man’s feelings according to his zodiac sign

How to know if an Aries sign man is in love

Aries people are impulsive and intemperate. Their feelings burst out of them with the pressure of an atomic bomb. If they fall in love, they won’t try to hide it. He’ll try to brazenly take his beloved. All and at once – this is about him. He will not beat around the bush.

How to know if a Taurus sign man is in love

Stealthy is about a Taurus man. He’s looking for the perfect one and for the long haul. He does not rush into a maelstrom. Nevertheless, he is prone to romantic gestures. And ready to provide all possible assistance. But he will not be able to wiggle out of it.

How to know if a Cancer sign man is in love

This one keeps his heart under lock and key – well, a very vulnerable sign of the Zodiac. What lies beneath the shell is easy to understand. A Cancer in love is stormy with mood swings – “then he cries, then he laughs”. Not vomiting, and not crying out loud, but to himself. Nevertheless, everything is clear without words – in the eyes.

How to know if a Leo sign man is in love

Expensive gifts and grand gestures are far from being evidence of feelings when it comes to the “king of beasts,” who by nature is generous, wasteful and prone to affects. His love will be told by the time he spends with you. Ready to trade his companionship with his “entourage” for your company? That’s love.

How do you know a Virgo sign man is in love?

This secretive and mercurial “dry man”, once in love, turns into a spirited prince. Very chatty, by the way. But very caring. “Do you want to eat?”, “what can I get you?”, “where can I take you?” – The eagerness to please comes out of my ears. And, of course, the interrogation – the guy needs to study you thoroughly.

How to know if a Libra sign man is in love

A Libra guy can make anyone’s head spin. One day he’s wooing you beautifully and showering you with compliments. Tomorrow he’s full of water in his mouth, shriveled up. Either way he drags you to the theaters and grooms you.

How do you know a Scorpio sign man is in love

This one falls in love on the flick, but what about himself? Identifying a Scorpio man in love is difficult. He hides all his feelings under a mask of cynicism. But he also has his own weaknesses – in particular, an irresistible desire to play. Game can be any – board, intellectual or bedtime.

How to understand that the Sagittarius sign man is in love

A Sagittarius man in love will make every effort to stand out from the crowd. Taking center stage, bursting into beautiful tirades – about the meaning of life, the mystery of love, and his noble goals. Not a windbag. The Sagittarius in love is the man who knows how to move mountains.

How to know if a Capricorn sign man is in love

If the Capricorn man you know has started showing up on your path too often, looking into your eyes and listening intently to you, it’s not just for fun. And the transformation from a reserved king to an excitable young commoner with everything falling out of his hands and a blush on his face is also for a reason.

How to know if an Aquarius sign man is in love

Aquarius will put on a real show in front of the object of love. He will dress up like a jester, comb his hair strangely and start to make a miracle – to walk in a wheel, to give flowers, to sing serenades. His whole world is centered on you, and he is absolutely not ashamed of it.

How to know if a Pisces sign man is in love

Pisces tries very hard to keep his feelings in his fins, but to understand that he is in love, is able to anyone. What gives it away is emotionality. The guy becomes restless, jealous, capricious, suspicious. True, quickly pulls himself together. Alas, not for long.

A man in love will do anything. Especially when he realizes he’s in love. That feeling is worth a lot. You’ve never experienced it? No one has ever fallen in love with you? Loved and been loved, but – “was”? Start a profile on a dating site. On what – prompts our rating of the best dating portals. Love is a verb. Act!