We would like to talk about two personality traits that are important for success in online  dating foreigners: they are patience and the ability to critically evaluate your own actions. By possessing these qualities, one can avoid the emotional stress of waiting and disappointment when the desired event does not happen quickly; and learn to bring out the best and most useful for oneself from every situation in life, whether it is a relationship with a foreigner or another life experience.

“He who is able to endure is able to achieve all that he wants,” Benjamin Franklin.

Dating and relationship development is not an exact science. One cannot pinpoint a clear timeline or frame of reference when an event inevitably happens/should happen under certain circumstances: water boiling at 100 degrees is a physical process, but a decent man is not “found” because of the optimal combination of temperature and pressure… There is no way to say that if you haven’t met your love within 10 days of being on an international dating site, it will never happen. Things can change very quickly, or they can take time. Every day brings new opportunities. After all, every fate, every love story is individual, exceptional in its uniqueness. Someone can find his man quickly enough, for some decisive role played by coincidence. Think about it, maybe the circumstances that will lead you to the one you love, have not yet formed… 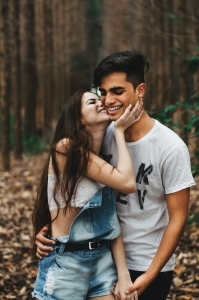 This thought, and the whole problem of the “time” it takes to meet “your” man in order to find the right man to start a family, can be well explained with the help of the example given in Sherin Wolf’s book, 50 Ways to Meet and Like a Man. A single woman wanted to meet a man with whom she could start a family. She turned to all sorts of dating services in her town and actively responded to advertisements from men wanting to meet. Unfortunately, the dating experience was a total failure and she was tired of wasting her time with unsuitable men and became disillusioned… However, after some time she rested and regained her strength of mind she continued her search and reached her goal! She met a worthy man and married him. An important circumstance in this story, is the fact that the future husband responded to the 96th advertisement she gave… If your goal is marital happiness, a relationship with the man you love, shouldn’t you show patience, self-control and go to your goal, no matter what?

Often we create boundaries for ourselves and sign a “verdict”: it’s not meant to be. If something isn’t working out, it’s worth taking a break, taking a break from dating for a while and thinking: why haven’t I met a worthy man yet? What is the reason for my loneliness? It’s not always the answer lies on the surface, it’s not always the “wrong” men who have met on the way of life. Why do I attract the “wrong” men? Is it possible that in dealing with worthy candidates I make mistakes that repel them?

The ability to answer these questions honestly depends directly on the ability to independently, and sometimes even critically, evaluate oneself and one’s actions.

“A jewel cannot be polished without friction. Neither can a man become successful without a sufficient number of difficult attempts.

We forgive ourselves a lot because we love ourselves and are well aware of our positive sides. However, does a stranger, a strange man who looks at a profile on an international dating site, hold the same opinion? Does he realize that shyness and fear of seeming intrusive are behind the taciturn, unambiguous and cold answers?

The truth is harsh: you can turn a blind eye to the flaws of someone you know and love, but not the first person you meet. For some people an extra weight or too short hair will be a problem, some people will be embarrassed by their lack of foreign language skills and the prospect of communication through an interpreter, some people will think that they are just being polite and that the real interest in acquaintance is missing…

Why does a man decide to write to a woman? There are many possible answers to this question. However, most often the decision about acquaintance (we are talking primarily about acquaintance on a dating site) is made if the photo in the profile is liked. It is impossible to discern a person’s inner world, to understand his uniqueness without starting to communicate. Spirituality, kindness and positive qualities of character do not show up in the appearance, it is impossible to understand them just by paying attention to a photo, and even more so in a bad photo. One of the possible reasons for failures in acquaintance with foreigners can be a photo. You can read more about the choice of photos for the dating site in the article “Dating with foreigners: how to choose the right photo?

Success, and not only success in personal life, is achieved by women who are able to work on themselves, who are not afraid to change in order to achieve their goal. Sometimes it is necessary to make a step, albeit a small, but confident step towards destiny… To do this you need to understand your mistakes and start working on correcting them.

An important step on the way to your goal is the desire to work on yourself, to change: not only externally but also internally. Of course, there are circumstances that are beyond our control, impossible to change, no matter how much we would like to. However, every woman can work on her inner world. What do you mean by that? You can start to learn foreign languages, to finally speak freely with foreign men and understand them. Openly communicate with different men, and begin to read articles and mentality of foreigners: about men, their way of thinking, about why men and women can be difficult to understand each other – a lot of books are written! We want to note that we should distinguish between books written by Western and domestic authors. What is characteristic of Slavic men cannot be attributed to foreigners. If you want to understand the way Western men act, pay attention to books written by foreign authors.

In conclusion, let us note that a simple desire to change your life, to meet an intelligent, self-sufficient man to create a family is sometimes not enough. It is not enough just to register your profile on an international dating site and wait for your future husband to make himself known. We have to take action! And it’s best to act deliberately: analyze your own perspectives and actions, try to understand your own mistakes and correct them.