Online Dating: Each dating story is unique and often the reasons that led to the end of communication can only be explained in the context of a specific situation. It is not easy to give an exact answer as to why a man stops responding to emails or loses interest. Maybe between a man and a woman there was no spark of interest and communication came to its logical conclusion – general interesting topics of conversation ended, and there was no interest to meet. It could also happen that, due to the coincidence of circumstances, sympathy arose for another person.

In spite of this, it is possible to distinguish 8 main mistakes made at the beginning of communication with foreign men, and one objective reason why both men and women quickly lose interest in international dating and relations with a foreigner.

Often, mistakes in communicating with a foreigner are the little things that spoil the impression after first communications.

So, Reasons why a foreign beau might lose interest:

1. The presence of a language barrier in communication is one of the main reasons why both men and women lose interest in international dating. It’s no secret that without the ability to fully communicate and understand the person you are talking to, getting to know each other intimately is quite problematic.

When dating takes place at a distance, through an international dating site, communication is an important attribute of dating. We have noted the importance of a common language of communication more than once. It does not matter if it is the native language of the man or woman, or only an intermediary language such as English. In the first stages of dating, besides communication, two people from different countries only have the opportunity to see each other on Skype. However, just seeing each other with a webcam will not be enough to make a decision about the first face-to-face meeting. In order to meet a worthy foreign man, it is necessary to try to overcome the language barrier.

2. The lady shows coldness and aloofness in communication. This is manifested in the fact that the answers to the man’s letters are short and unambiguous, with no question or hint of interest in the man’s life. This is a peculiarity of the mentality and upbringing of Slavic women. Many women expect initiative from a man and on purpose, due to stereotypes or shyness, try not to show their interest in him. Europeans interpret this behavior as disinterest in dating and stop trying to win a silent stranger.

3. The lady’s correspondence emphasizes the man’s material well-being: she is interested in his income level and the availability of his possessions. Like any normal person, the foreign man wants to be sincerely loved. His material well-being becomes a topic for discussion when the decision to start a family is made. The presence of an increased interest in material well-being in the first letters, repels foreign suitors.

4. Replies to a foreigner’s letters come with a long delay. We talked about the consequences of the following manner of dating foreigners: “I’ll answer him tomorrow, let him languish waiting for my letter” in the article “Serious Dating Site with Foreigners: Am I Serious about Finding a Husband?”.

5. A woman presents herself as a victim of bad dating experiences, failed relationships, unscrupulous men, or stereotypes. A foreign suitor should not get the impression that the woman, first, is not ready for a new relationship, as she willingly and in great detail talks about how difficult and painful her previous relationships were. Secondly, she dislikes all male representatives, as any man who gets acquainted online is a potential cheater. And, thirdly, certainly not every man, while communicating with a woman he likes, wants to feel like a suspect during the interrogation. Let’s dwell on each point in more detail. 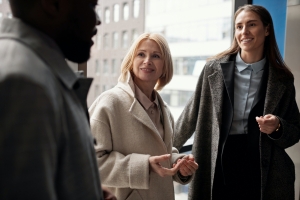 Every adult understands that a relationship between two people is a complex web of feelings, actions, causes, effects, and circumstances. Responsibility in a relationship is divided equally between a man and a woman. Each “brings” its own share of love, care, participation, and responsibility. An adult man, no matter what country he is from, understands this very well. It is not always just one man who is responsible for the breakup. The reasons that led to the breakup are much more complex and profound than, for example, the fact of adultery itself. The breakup is a consequence of the couple being unhappy together, a consequence of conflicts, problems and dissatisfaction in the relationship. Going deep into the description of the past, into the description of the former lover’s transgressions, the woman gives the impression of not being ready for a new serious relationship.

In order to be ready for a new relationship, one must make peace with her past. In his book You Know Nothing About Men, Steve Harvey writes: “There’s no room in your heart for a new man until you put away the old junk.”.

Let’s also say a few words about the harm of stereotypes that have developed about online dating and, in particular, men who use dating sites. Not all men are the same and there are exceptions to every rule. You should not treat every new man with suspicion and be blindly guided by the common stereotypes about online dating. A foreigner who wants to meet you on a dating site has not yet shown himself to be a scoundrel, he is only trying to get to know you better. He hasn’t done anything wrong and is not responsible for dishonest members of the stronger sex! Negative experiences should teach you to recognize lies, but they should not be an obstacle on the way to a harmonious relationship, to personal happiness. You should abandon the hasty conclusions and more often give a man the opportunity to prove himself, without stigmatizing him in advance. You should not allow past negative experiences and stereotypes to make a victim out of you.

6. Lack of sense of humor. Many men are characterized by sarcasm and black humor. It is part of their “being,” part of their personality. It’s no secret that women often do not understand men’s humor, they react to jokes with anger and get defensive. A man who is looking for a life partner wants to be understood, to laugh with him, he wants to enjoy life together with his beloved.

7. A man receives letters full of sadness and complaints about lack of money, men, the country, etc. As has been noted many times in the pages of our blog, dating should bring positive emotions. Complaints give rise to feelings of pity, not interest in continuing to get to know each other.

8. Failure to maintain an interesting conversation. This point does not need to be commented on.

9. Lack of Trust. Long-distance relationships, dating for the purpose of a serious relationship should be built on mutual trust. It is very easy to lose the trust of a new foreign suitor by giving wrong information in a questionnaire on an international dating site. This applies to age, name, country of residence, having children and other items of biography that can be “embellished”. Perhaps the purpose of the “little trick” was innocent – to attract the attention of an interesting man. However, you can not predict how this or that gentleman will react to the confession. Confidence is easy to lose and difficult to win again.