The goal of serious online dating is a real relationship. Real meetings help to understand if a couple who met on an international dating site can have a future together. The first meeting plays a special role: it helps to understand if the feelings that arose during distant communication were not an illusion. Often when we want something badly and are looking forward to it, we tend to idealize the situation, our reaction (we think we will like the foreigner in real life) and the person himself.

There are three possibilities for arranging a first meeting with a foreigner: the man comes to the woman’s city of residence; the woman visits the man in his country of residence; the man and woman meet at a resort. We do not recommend the last two options for arranging a first meeting: going to a man’s city and vacationing together. The willingness of ladies to invest in the first meeting with a foreigner is quite low. And men, in turn, have doubts and are afraid to be deceived when it comes to financing a trip for a lady they met on an international dating site. Recall that one of the most common fraud schemes on the Internet is to pay for a trip for a pretty stranger who is ready to come to a man to meet him. Once the first meeting has taken place, and both are convinced that a relationship is possible and the new internet acquaintance or acquaintance is “real”, questions of a material nature and the doubts associated with them cease to influence the decision-making process.

In consequence of the above-mentioned reasons, we advise choosing the following option for the first meeting: the foreigner comes to the woman’s country for dating. 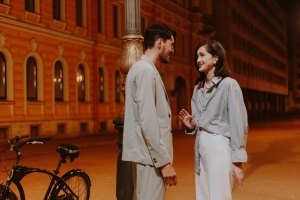 On the pages of our blog for men, we try to explain to them why it’s so important to come to a woman’s house for the first meeting. Many men understand this and are willing to make the trip if they meet a really serious woman** who will arouse not only sympathy but also trust. However, there are exceptions – men who are not ready to make the trip to Eastern Europe.

We would like to point out that if a woman is really important to a man, if he is interested in developing a relationship with her, he’s willing to come.. The rest are excuses, disinterestedness, and a latent unwillingness to take serious steps. A man who is afraid of something or finds reasons for it is better to forget and not worry about it. If he is not willing to do manly things at the beginning of a relationship, he won’t be willing to do them later on.

Tips for arranging a first meeting with a foreigner

* Meeting in a resort location has one advantage: if a man and woman do not like each other, they can easily explain themselves, say goodbye and each will continue their vacation.

** How women sometimes, unknowingly, give the impression of being uninterested in a serious relationship, we talked about in the article “Serious Dating Site with Foreigners: Am I Serious about Finding a Husband?”