Unfortunately, we have begun to notice that many ladies make demands on dating sites, on men (don’t get us wrong, there’s nothing wrong with that!), but the “behavior” and manner of dating ladies does not speak to the seriousness of their own intentions. Men have to wait days or even weeks for an answer, and when they get the long-awaited lines, they are perplexed by the fact that short messages sound rude, full of negativity, distrust and dislike of the male sex.

Lovely ladies, an international dating site is a platform where people who share a common goal meet. For example, on an international dating site MeetKing – are men from Western Europe and women from Eastern Europe who want to meet someone for a serious relationship. We give opportunity find a man to start a family, how everyone will use this opportunity does not depend on us, it is a personal matter of each woman and each man. After all, when personal communication between two people begins, the work of the site ends. The responsibility for whether dating will lead to the desired goal, for the success of dating, lies directly on the man and woman, not on the site. A dating site can’t communicate with a man for you and correct communication errors. The site cannot make two people “fall in love” with each other. We check profiles of new users, we listen to criticism and suggestions, we can help with advice, if you are ready to talk openly about dating, relationships and listen to criticism, but happiness in your personal life can only be achieved by your own efforts!

If you are registered on many dating sites with foreigners, communicating with different men, but suitors too quickly “disappear” and find your man does not work, think about it, maybe the problem is not in sites and not in men.

1. Respond to men’s letters in a timely manner. Ideally, the same day you receive your first message. While a man is waiting for an answer, and especially to the first message, he does not languish in anticipation, his feelings do not grow stronger, he gradually loses interest, because there is a big difference between “live” communication and dating, and online dating through an international dating site. After meeting a woman “live” in real life, the man is interested and will languish waiting for the next meeting, her call, because he was attracted to her image in general (appearance, demeanor, manner of speaking – all this you can not convey with a profile on a dating site or photos). Having seen a woman’s profile on the dating site, a man got interested in acquaintance and wrote to her expecting a timely reaction. If that response didn’t come on the first day, he continued to look at other women’s profiles. At that time, he will gradually lose interest and, having received a response a few days later, he may no longer be interested in dating, as he has started communicating with another woman who responded to his letter in time.

If, due to certain circumstances, you can’t respond quickly to a man, send him a short message so he doesn’t lose interest and is not at a loss as to why there is no response to his email. Let him know you received his letter and would love to get to know him, but you don’t have a chance to send him a full reply at the moment, but you will definitely write to him when you have some free time.

2. Be responsible about the selection of photos. When adding photos to your profile on an international dating site, think about what kind of reaction they should provoke in men, what and who does a man see in a photo? This applies to non-professional photos that focus on certain body parts, photos taken from a distance so that you have to look closely to see the woman, and obscured photos. 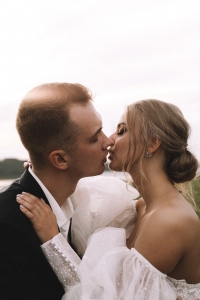 If a non-professional photo that was taken in a home setting has 50% of the cleavage in the picture, it’s hard to tell how serious the lady is. It is quite natural that after seeing such a picture many men will be interested, however, at the same time they will ask a question: what kind of relationship is she looking for? Photos should emphasize the advantages of appearance, but not to flaunt individual body parts.

3. Politeness in communication. Unfortunately, many women have negative experiences with men and online dating. This experience should help, teach a woman how to discern deception, how to understand that a man is not in the mood to look for a serious relationship, but not to hinder dating. After all, very often the wariness and mistrust manifest themselves in rudeness. Romantic feelings are not born out of rudeness and negative emotions. Anger and bitterness can only cause pity and resentment. The man who sent you a message is not responsible for all those who hurt you. He’s taking the first step to get to know you, there’s no need to push him away or immediately classify him as a potential cheater. Remember the golden rule of morality: “treat people as you would have them treat you.”. This applies not only to potential suitors, but also to dating site employees.

In Western European countries, politeness in addressing plays a very important role, and by receiving rude, cold responses, European men tend to think that women are not interested in dating them.