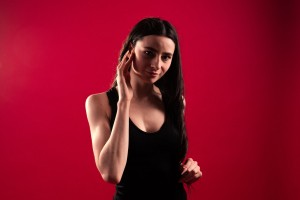 Most guys are attracted to the neighbor girl. But eventually our focus shifts to someone we can settle down with.

We usually look for the wholesome, naturally pretty, more reserved woman we’ve come to know as ‘the girl next door’. Somehow she embodies all our more mature and tame instincts: Marriage, children, and tender companionship. The main difference in our thinking is that her qualities are as important to us as her looks.

But the million dollar question is, does she really exist or has the collective male psyche only created her to be an unattainable dream? Let’s find out why this down-home cutie is on our fantasy list, and figure out what we can do to confirm or debunk the myth of the girl next door.

Who is the girl next door?

First, allow me to define her.

She is untouched ground (at least in your mind); Untouched by other men and so lovely that it almost scares you to think of her in explicit sexual situations. Almost . Here’s another example: imagine your sister’s best friend from your childhood. In your mind, she will always be the 10-year-old cutie who played with you in the park. Only, when you catch up with her 10 years later, she’s still a cutie, but all grown up and someone you can trust and connect with on so many new levels. The intrigue grows.

Likewise, she could be the cousin of a friend you’ve met at family gatherings over the years. Or even a new co-worker at work who is shy and modest, but still makes you feel like she’s so nice, I’d like to talk to her.

Do you have the picture yet?

There are so many ‘girl next door’ type characteristics that are considered ‘good’ or ‘virtuous’. These are things we look for in a woman that earn the respect of our sensitive male side.

It’s nurturing and sweet. Unlike so many women you’ve dated who have had militant positions against being kind to you just because you were a man, she understands your needs and is willing to take care of you when you’re sick. Her sweet demeanor – and the knowledge that what goes around comes around – makes you want to be with her and take care of her in kind.

She doesn’t draw attention to herself. She is ‘under the radar’ so to speak. Guys won’t meet her everywhere you go; not because she’s unattractive, but because she prefers to remain low-key, both in her looks and her attitude. She’s neither a flirt nor flashy; but she has that natural beauty that doesn’t require layers of makeup.

She is predictable, but this could also be one of her faults…