“Good evening, I’m sending you a picture of Robert and me! Here we are, we met. Robert came to St. Petersburg to meet us. Those were the happiest days… Thank you! We are happy that we found each other on your site of dating.” Lyudmila

“Online dating. For many people, it may be a strange way to find your one true love. But, if you have faith in yourself, believe what you see and read, it can be a good way to find true love. As for me, I found it. In fact, it was she who found me. And I am very happy and thus confirm: it is possible to find your other half. Online dating is not just virtual communication, for me it has become real.” Robert 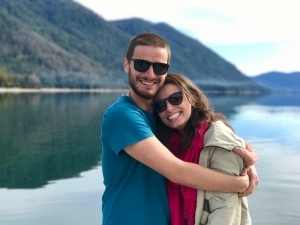 Ludmila from St. Petersburg, Russia, and Robert from Austria met on the website MeetKing January 2017. Robert told us that Ludmila was the first person to write to him. During the first three weeks, their communication developed and led to Robert coming to St. Petersburg in late February 2017 to meet with Ludmila.

Robert admits that one of the positives, is that the couple has no age difference. They are both at a mature age, the age when people look at the world and its problems differently and, therefore, they have a lot in common.

“From the beginning it was like we’ve known each other for years. It’s really great. That said, we’re both a little older, we’ve both been through a lot. So communication is pretty easy and loving. For 5 days, we walked around St. Petersburg and saw a lot.” Robert

Have you thought about how your long-distance relationship will develop further?

“We already have serious plans. In our long-distance relationship, we don’t feel distance. We have Viber and we text each other all day long. She (Lyudmila) works, I work, but it’s great to keep in touch with Viber.” Robert

Does Ludmilla plan to visit you in Austria?

“Yes, she’s in the process of getting a new passport right now and after that she plans to apply for a one-year Schengen visa to Finland. That goes through very easily… And when she gets the visa, she will be coming to Austria often. A summer vacation is already being planned.” Robert

Do you understand each other easily? Do you have no language barrier?

“My advantage is that I understand Russian, I lived in Crimea for eight years and worked there. Although sometimes I don’t quite understand Lyudmila or express my thoughts incorrectly. But we have fun, with humor. And if we don’t understand each other at all, sign language always helps. But in general, there are no problems. It feels like we know each other from a past life. I can’t describe it better :)))” Robert

We conclude with Ludmila’s wish for other women who have not yet met their man.

“Dear, sweet women! Don’t lose hope of meeting the man you love. Look for your beloved, don’t lose hope, write first and everything will work out. I wish all love and tenderness, happiness and health, mutual understanding and faithfulness. Be open to new relationships, let go of the past. And believe me, everything will be better than ever.” Ludmila

This article is based on correspondence between Lyudmila, Robert, and a member of the site MeetKing. The material is published with the consent of Ludmilla and Robert.