Flirting isn’t just for that hot, tension-filled “getting-to-know-you” phase, though. It’s also when you’re getting old and gray together and sitting in your rocking chairs after decades of marriage. Even if you’ve caught your guy and are living happily ever after, never stop flirting. It’s a great way to keep the relationship fun and fresh.

Relationship problems often start when things get boring. So keep up the thrill of the chase, even if you’ve already caught Mr. Right.

And even if your flirting game is on a professional level, we could all use a few new moves. Try these flirting tips for girls and see which ones score for you. 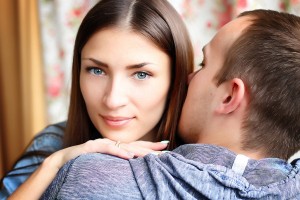 We all have our flirting moves, but even favorites get stale if you overuse them. Combine your techniques and surprise him by pulling out a routine he hasn’t seen before. Soon enough, you’ll learn which of these flirting tips you’re comfortable with and which he really responds to.

My most powerful sex tricks and tips are not on this page. If you want to access it and give your man an arching orgasm that will keep him sexually obsessed with you, you can learn these secret sex techniques in my private and discreet newsletter . You will also learn the 5 dangerous mistakes that ruin your sex life and your relationship. Get it here .

But if you try something new now and then, you’ll keep him on his toes. Plus, you might discover a new favorite.

2. Relax And Enjoy It

Flirting should be fun for both of you. If you force it or just don’t feel in it, it will probably come off as awkward and weird. It’s perfectly normal to feel nervous, and that swarm of butterflies in your stomach when you feel nervous can be beautiful. So do your best to relax and make it natural.

Whether you’re trying to pick up a hot new girl or attract the attention of your flame, sometimes the best flirting style is to be a little shy. Try being a little sneaky and sly instead of being obvious. These low-key flirting tips will have him asking, ‘Is she?” and hoping the answer is yes. Perfect for improving the sexual chemistry between you. Speaking of which, you may enjoy these tips for building sexual chemistry .

This is not a spontaneous technique, but if you know you want to flirt, look good first. A short dress or skirt that shows off your legs will look feminine and perky. Put on some heels to make your legs look more toned. Draw his attention by crossing and uncrossing your bare limbs. You will find it More tips on how to dress sexy here .

It’s no surprise that most men like girls who are relaxed and fun, not those who are tense. Laugh at his jokes, play with his antics and go with the flow. Most people want to be with someone who has a good sense of humor. So make your own jokes and tease him a little.

It’s even okay to be a little silly sometimes … in fact, you’ll find that being silly is much more interesting and fun than being ‘serious’ all the time.

Flirting is all about the thrill of the chase. Giving in too easily shortens the fun. So make him work for your attention once in a while. Most guys crave what they can’t have, so don’t make yourself too available. This doesn’t just apply to the bedroom.

Give him the hint that his time with you is limited by mentioning that you have plans or can’t talk for long. It may be enough to ask him what he is missing. Be careful, there is a fine line between getting hard and giving him the cold shoulder.

4. Whisper In His Ear

In a crowded room or busy social scene, lean in close and whisper in his ear instead of how you would normally speak to him. The action will create a sense of intimacy and draw his thoughts away from everyone else and toward you. Be sure to keep your voice soft and sultry. you want him to work just a little bit to hear you.

When he draws his attention to your lips, he can think about what it would be like to kiss them.

There is something very sensual about a woman gently biting her lower lip. He may not be able to pull his eyes away. But don’t get carried away. You want to look a little lustful, not like you’re chewing your lip out of nervousness lol. This tactic is even better with a glossy lip in Not-Me Red.

Make eye contact with him for a real power move, brush your hair behind your ear as you pull one side of your bottom lip between your teeth and let out a big chest-high sigh. Admit it, your pulse quickened when you read that description. Imagine what it will do to him.

During your conversation, say his name while gently touching his arm, or put your hand on his leg while laughing at his joke.

Also, try squeezing past him in a crowded area and letting your body and especially your breasts brush against him. This alone may not make much difference. However, when combined with other flirting tips, it can be especially intense. Speaking of other flirting techniques, Here you can find more .

Guys and girls, as their ego stroked from time to time, one of the surest flirting techniques is to give him a sincere compliment.

Like most of these flirting tips, use them sparingly. Giving too many compliments sounds clingy and obvious. Don’t just throw out random statements. Focus on the things that are clearly important to him, changes you’ve noticed or that he’s been working on. For a more advanced move, combine a compliment with physical touch.

Tell him how much you like his new haircut while running your fingers through the tips. Or say something like: ‘You’ve been working out, you look ripped’. While putting a hand on his biceps.

8. Let Him Catch You Looking At Him

Whether he’s someone you’ve never met or your longtime lover, people usually feel desirable to catch someone looking at them in a way that shows they’re interested.

From across the room, catch his gaze, hold it for a moment, then wink briefly and wave your fingertips. Now look away.

Hopefully, he’ll wonder who this beautiful woman is, or remind him that he’d rather be with you than the people he’s talking to right now. Remember, this should be sultry, no creepy look down So don’t spend the whole evening pointing your laser beams at him.

With any of these flirting tips, you want to appear fun, energetic and approachable, not closed. Your body language should attract him. Instead of crossing your arms, let them hang at your side, hold a drink, or gesture animatedly when you speak.

A firm stance with feet planted a few inches apart can be intimidating. Instead, shift your weight to one foot or lean casually against something. Now point your chin slightly outward and tilt your head to the side.

Once you have his attention, it’s time to keep it. A strong, confident woman can’t play shy forever So sometimes you really have to put yourself out there and make a big move. Some of these bold flirting tips are best for keeping the spark in an established relationship, but others can be used early on in a new fling. One thing is for sure; The following flirting moves increase the heat.

This flirting tip is all about anticipation.

It puts you in the spotlight and makes him want what he can’t have yet. With words or a photo, this can range from mildly suggestive to downright dirty. Just start with,

Or make it real and tell him what you want him to do to you. For something more visual, send a tasteful cleavage shot or one of what you’re wearing (or not wearing). Just be ready to follow up on anything you offer in the text, because he won’t forget. More useful tips on text messaging can be found in This article on dirty text messaging and this one on flirty text messaging .

Grabbing his butt is a totally unexpected move that will surprise him. Try it on the dance floor or while moving through a crowded room. Or if you’re a longtime couple, while walking through the grocery store. Set a playful tone by pinching him and giggling. ‘Gotcha.’

Or turn it up a notch with a lingering snort as you lean against him and whisper ‘I’ll have more of this later.’

Sometimes you just want to grab him. Don’t fight it. Give in to the urge and kiss him passionately and unexpectedly when the mood strikes. Not only will you both enjoy it, it will show him that you’re thinking about him. Grab him and let him take a little break while he washes dishes, pays the bills, or walks across a parking lot.

Then walk away without escalating the situation. Then he’ll think about how hot you are and want more. More great kissing tips can be found here in this video tutorial and this article too.

You spent the evening hoping for an opportunity to meet him, but it didn’t work out.

Stop admiring from afar and make it happen.

Write your name and number on a piece of paper. Approach him, make eye contact, and give him the paper. When you hold his hand between yours, tell him you look forward to talking to him later.

Don’t even say your name.

Give him a little wink, turn and walk away with a hair toss and a booty wiggle. Now you’re an intriguing mystery for him to explore. If you’ve been together a long time, don’t throw this one out of your bag of tricks just yet. Instead, use it as a lively start to a little role play. More tips on role-playing here .

Whether you’ve just met or have already spent a lifetime together, flirting is a fun and naughty way to get his attention. At first it makes you alluring, and later it keeps things from getting stale. Just like you, most men want to flirt with them. it makes them desirable and attractive.

But it’s not just for him. Flirting can be empowering. From shy to brash, flirting can make you feel like a vixen, and we all need a little of that.