Here are some of the different ways people flirt. Once you recognize the flirting signs, you can flirt back if you like him, and you’ll know how to tell if a man is flirting with you.

If he compliments you, it probably means he likes you, and this is one of the most common flirting signs. He is looking for a way to start a conversation with you, for example, when he tells you that he likes your shoes. He probably doesn’t really care about your shoes. He just wants to get to know you. He might also tell you how nice you look. Take this as a good sign.

Return his compliments if you want to flirt in return. He will feel great !

Teasing is a flirting sign. He may want to tease you if he likes you so that the two of you can laugh together. For example, he might trick you by saying something shocking, maybe that he just got out of jail. You’re a bit caught off guard and ask if he really was in jail. He might keep up the joke a bit to get you to believe him, and then tell you he was just kidding.

You might find this funny or strange. In either case, he’s probably flirting with you when he teases you. Or he’s making fun of you in some way, like the hairstyle you’ve chosen. He probably doesn’t really like your hairstyle. He’s just trying to create a playful dynamic. When you get into a relationship, you can continue to tease each other. Read more here.

You probably won’t want to be with a man who tells you right away that he wants to have sex with you. If a man lets you know he is attracted to you through more subtle sexual innuendo, this is a flirtation sign. He might “joke” that he wants to take you home or tell you how hot you look in that top. You are now the judge of whether you like him or if he has crossed the line into Creepsville.

4. Have a serious interest in you

If he is genuinely interested in you, he will make an effort to get to know you. This is a true sign of flirting. He will ask you more questions to show that what you said was not only interesting to him, but that he wants to hear more. You may be seeing each other for the second time. He may show interest in you by remembering what you said to him last time and asking you about it. He might also ask your opinion about something. Anything he says to show that he is interested in you and not just interested in dating anyone shows that he is really into you.

Touching while flirting is a huge flirting sign. No one will willingly touch someone they are not interested in. A friendly touch might consist of tapping you on the shoulder. Touching around the waist or forearm is a little more intimate. And the ultimate flirty touching is touching your face. When he does that, He’s really attracted to you . You can return the favor, and he’ll be more interested in you too! Read more in this post .

If he smiles at you a lot, it’s probably not because he’s thinking of an inside joke. He probably likes you. Smile at him. It’s a great way to win him over. Looking for more seduction ideas? Click Here .

After smiling comes eye contact. But staring at you without a smile can be really off-putting. So if he makes eye contact with you after or during a smiling session, you can take it as a sign of flirting. Eye contact generally means he is interested. Hold eye contact with him for two minutes and you should both start to feel romance.

When he positions his body to face you or when he tilts his head toward you, he likes you and flirts with you. He’s trying to show you that he’s into you and wants to hear everything you have to say. Who wouldn’t like that?

People tend to like people who are similar to them. So if a man mirrors your actions, he may be trying to get you to like him. An example of mirroring would be to match your gestures. If you smile and are happy, he will smile and be happy. If you speak in a low voice, he will make sure that the volume stays low as well. This will make you like and trust him.

Learn more about body language in this helpful post .

If he’s flirting with you, he won’t give up after an unanswered text. If you want to determine if a man is flirting with you, check to see if he tries again. Possibly send you a funny message that he hopes will make you smile. If so, write him back. This post has information about when you should text.

When he’s really flirting, he uses an emoji. His ultimate goal by texting you is to get you to meet him, of course, so his texts should eventually lead to that.

2. Drop by your workplace

If he makes an effort to stop by your work, perhaps to bring lunch or to see if you need to go home, he is in love with you. He is showing that he wants to take care of you, and he wants your coworkers to know that you have a husband. If you don’t want to be in a relationship with him, let him know right away. You don’t want this to affect your job. But if you like him too, relax and enjoy it.

3. Invite you to events

If he invites you, it probably means he’s flirting and that he likes you. However, pay attention to what he invites you to. If you’re always just hanging out with his friends, or if he just wants someone to go to a party with him, he may just want to be friends. But if he invites you to a more intimate place, just the two of you alone, you can be sure that he wants to be more than just friends. 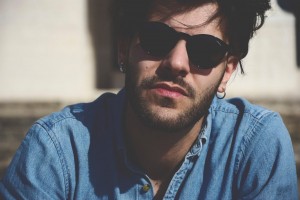 If he likes and comments on your social media posts fairly regularly, this is a flirtation sign. He’s trying to support you and show that he cares. He may be the type to like or comment on posts all the time. So if this is the only sign you get, it’s hard to tell if this is flirting. Your interactions would need to be more personal than just this. But it’s a start on how to tell if a guy is flirting with you.

Check out all of our articles on learning to flirt, reading his cues, and sending flirty signs of your own!

If you are wondering how to tell if a man is flirting with you, understand that flirting can be mistaken for friendliness. For this reason, it is important to understand flirting signs. It is possible for people to be flirtatious without liking you. Some people are just natural flirts and act flirty with everyone. Notice how he acts around other women. If he acts the same way with everyone, you can’t trust that he really likes you. If he starts treating you differently than the others by paying more attention to you, you can take that as a flirting sign.